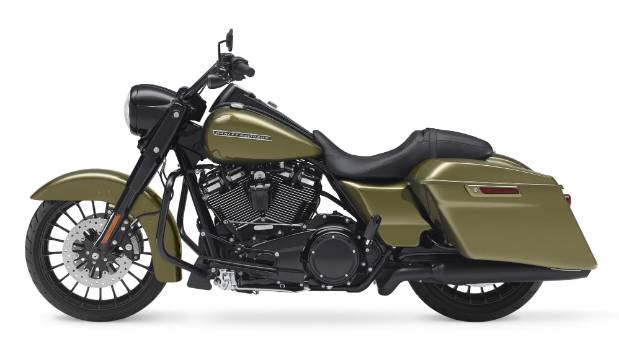 Harley-Davidson has gone to black with the 2017 Road King Special.

Swapping out chrome for black on its most popular model, the new Road King Special motorcycle moves Harley-Davidson’s touring line in a new styling direction, with a more contemporary look. 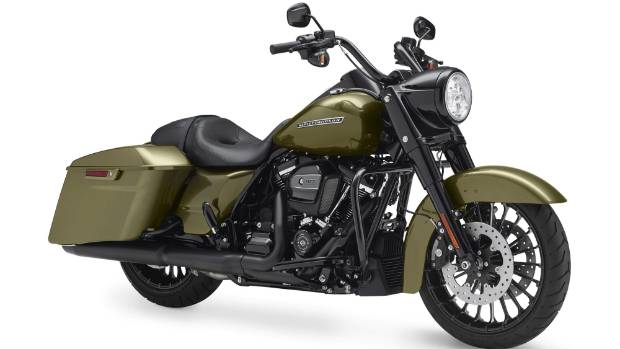 The signature styling element is a dark front end topped by a black headlamp. New mini-ape handlebars do double duty by putting the rider in a more aggressive posture on the bike, yet Harley-Davidson says it’s comfortable for cruising.

“Chrome was retained only on some key engine components,” said Harley-Davidson designer Dais Nagao. “The lower rocker boxes, push-rod tubes and tappet blocks are finished with chrome to emphasize the V-Twin shape of the Milwaukee-Eight 107 engine.”

New on all of the 2017 touring models, the Milwaukee-Eight engine offers quick throttle response, more passing power, purer sound, and a smoother ride than the engine it replaces.

The Road King Special is the first model to feature the Milwaukee-Eight in an all-black engine finish.

At the rear, elongated saddlebags above the mufflers provide a slammed-to-the-ground appearance without reducing suspension travel, according to Harley-Davidson. A panel fills the gap between the saddlebags and rear fender, and a low mounted license plate module completes the tight, low lines of the rear end.

The Milwaukee-based company introduced the Road King Special on the eve of this month’s 2017 Chicago Motorcycle Show, held during the opening weekend of the Chicago Auto Show.