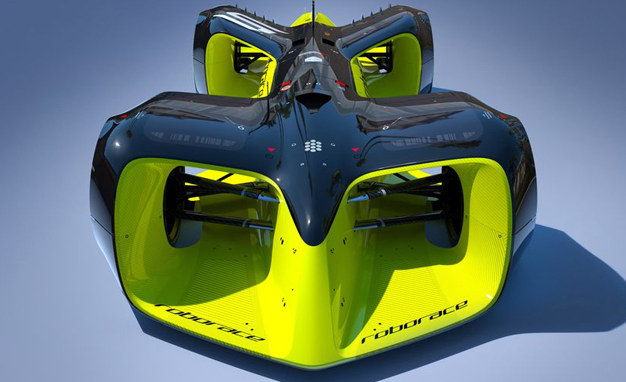 By Benjamin Preston
Someday, we’ve been told, driverless cars will be the only vehicles on public roads, places where crashes are rare occurrences. But what about racetracks, where the possibility of a high-speed collision is still a serious risk to drivers? What if the cars drove themselves, removing human risk from the equation, and creating a unique test bed for autonomous vehicle technology?

In October, automated racing will no longer be the stuff of fantasy. Formula E, the electric-car racing series, will feature Roborace, a competition between driverless cars. It may sound strange to hold a race without drivers, but in this case, the competitors will be computer scientists. There will be 10 teams, each with two identical electric race cars.

How does it work? Think slot cars, but without the slots and without the controllers, zooming around a real, life-size track. The competition aspect is simple: May the best code win.

The absence of a driver allowed his team more room to play with the design, resulting in a shape that’s much different from anything we’ve seen.

Roborace will be run concurrently with the Formula E series, with stops in London; Paris; Berlin; Moscow; Beijing; Buenos Aires; Mexico City; Punta Del Este, Uruguay; Putrajaya, Malaysia; and Long Beach—pitting the 10 software-engineering teams against one another in hour-long races.

The cars look futuristic. That shouldn’t come as a shock; Daniel Simon, a former Bugatti designer who created the “light cycles” for the movie Tron: Legacy is behind the design. When the concept driverless race car was revealed this spring, Simon said that the absence of a driver allowed his team more room to play with the design, resulting in a shape that’s much different from anything we’ve seen. 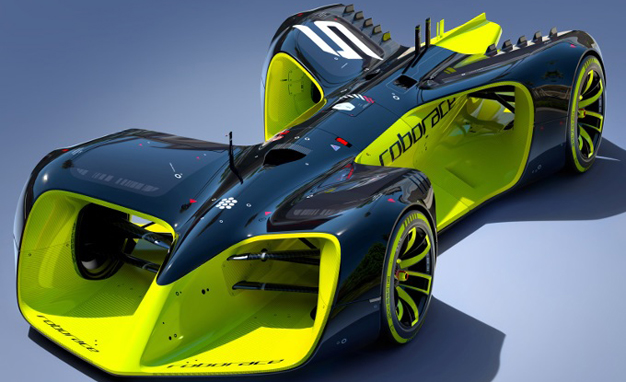 “My goal was to create a vehicle that takes full advantage of the unusual opportunities of having no driver without ever compromising on beauty,” Simon said at the car’s debut. “The Roborace is as much about competition as it is entertainment. Therefore—and quite unusual in today’s racing world—beauty was very high on our agenda and we work hard to merge the best performance with stunning styling.” Simon also revealed that the car’s scoop-like wings would create “substantial downforce,” which could, theoretically, allow for unorthodox track obstacles.

The real power behind the upcoming race series isn’t in electric motors or sleek design; it’s in the car’s ability to process huge amounts of data at lightning speed. Roborace enlisted the help of Nvidia, a Silicon Valley tech company, to develop the supercomputers needed to power the cars’ programming. Nvidia said in April that the DRIVE PX2 computers that will power each car can perform as many as 24 trillion operations per second—about the same as could 150 Macbook Pro laptop computers. Roughly the size of a lunchbox, each DRIVE PX2 computer will process inputs from an array of inputs, including cameras, radar and lidar sensors, GPS positioning, and high-definition mapping programs.

Kinetik, the company behind Roborace, hasn’t yet offered more details about the car or the race. We don’t know yet how the cars’ drivetrains will be laid out, how much power their electric motors will produce, or how the races will be formatted. But Roborace told us that it would make a more detailed announcement in the fall, closer to the start of the series’ inaugural season.

For now, we’ll have to imagine brightly colored high-tech supercars zipping around in Tron-esque loops, a huddle of white-jacketed scientists watching with bespectacled fascination as their many hours of number crunching unfolds on the track. If driverless racing catches on, there undoubtedly will be a number of real, live cheering fans in attendance as well.

We use cookies on our website to give you the most relevant experience by remembering your preferences and repeat visits. By clicking “ACCEPT ALL”, you consent to the use of ALL the cookies. However, you may visit "Cookie Settings" to provide a controlled consent.
Cookie SettingsREJECT ALLACCEPT ALL
Manage consent

This website uses cookies to improve your experience while you navigate through the website. Out of these, the cookies that are categorized as necessary are stored on your browser as they are essential for the working of basic functionalities of the website. We also use third-party cookies that help us analyze and understand how you use this website. These cookies will be stored in your browser only with your consent. You also have the option to opt-out of these cookies. But opting out of some of these cookies may affect your browsing experience.
Necessary Always Enabled

Performance cookies are used to understand and analyze the key performance indexes of the website which helps in delivering a better user experience for the visitors.

Analytical cookies are used to understand how visitors interact with the website. These cookies help provide information on metrics the number of visitors, bounce rate, traffic source, etc.

Advertisement cookies are used to provide visitors with relevant ads and marketing campaigns. These cookies track visitors across websites and collect information to provide customized ads.

Other uncategorized cookies are those that are being analyzed and have not been classified into a category as yet.