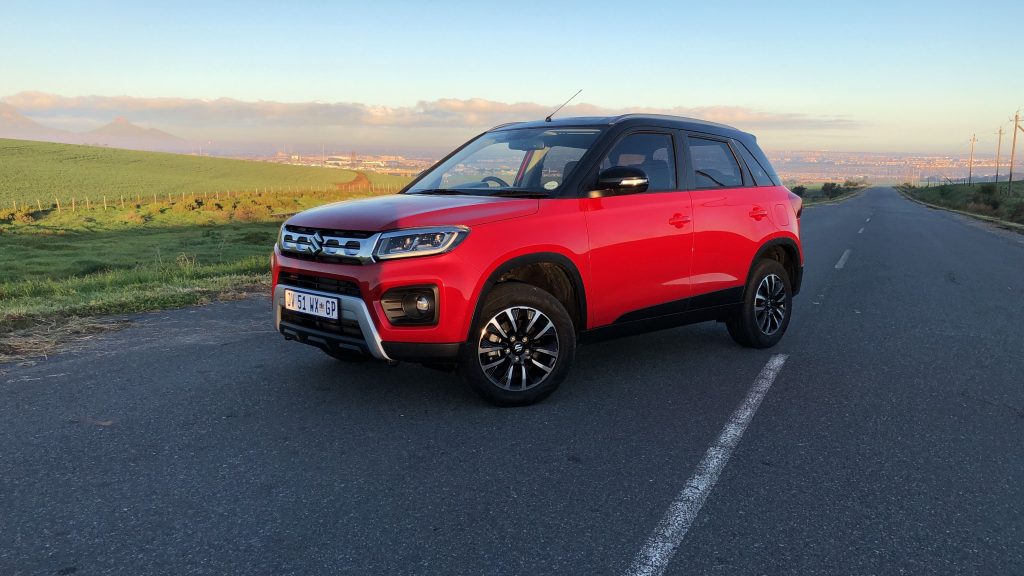 We had the new bold compact SUV from Suzuki on test and spent some time getting to know
the fun little SUV which has lots of talent.

The compact SUV market is suddenly booming in South Africa and everywhere you look you will see a Kia/ Hyundai or even a VW SUV running around. This styling is on trend and the go to for new car buyers. I think it makes you feel like you can go anywhere even with its very limited ground clearance as it still gives you the confidence you might need to hit the road for those long weekends and out of the city runs to wine estates in your new Suzuki Brezza! 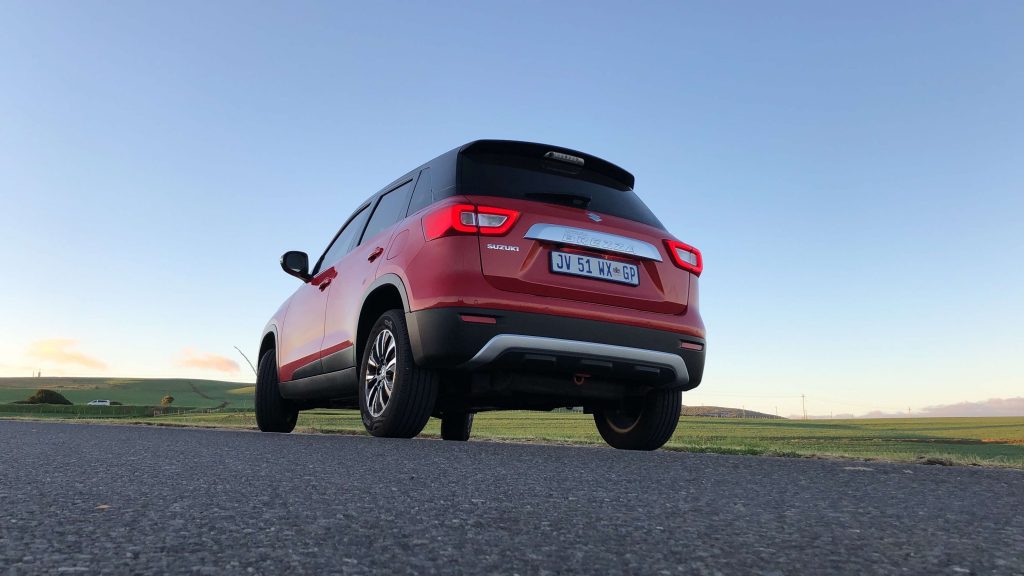 We love the front of the new Suzuki its very brand on point giving the impression of a well thought out car and certainly has a premium feel. The grille and headlights flow into each other seamlessly along with nicely integrated faux skid plates, premium alloy wheels, protective black cladding on the bottom edges of the flanks and wheel arches. Elongated LED lights featuring a 3D effect at the rear and a stylish chrome grille with that recognisable Suzuki “S” logo in front. Alloy wheels are standard on the GLX derivative with the GL variants requiring the buyer to pick an after-market set if they don’t want to be seen sporting the steel wheels and hubcaps, can’t believe I’m saying that in 2021. A two-toned roof body colour is optional on the GLX model providing a sleek floating roof-effect. The rear spoiler gives the

Brezza a slightly sporty appearance although I believe it could have been more pronounced. The Vitara Brezza has slightly higher ground clearance than the larger Vitara which is interesting for this sized vehicle.

It is equipped with good quality black cloth seats featuring a nice sleek honeycomb-design and a clean practical dashboard configuration making it a comfortable place to be and can  double as a remote office on the road. The Brezza’s predominantly plastic cabin certainly has its fair share of hard plastics but they were clever enough to put better quality finishes on the parts you see and touch the most. It’s solidly built and the monotony is broken with piano-black trim and silver plastic accents.

The infotainment system has Apple CarPlay/Android Auto and the standard USB type B port to connect with the system, not the type C which has been rolled out with most new cars going to market. The lighting surrounding the odometer and speedometer is nice and features 5 options, check out our Instagram stories on the breeze to see them in action. Other GLX touches include a leather-covered steering wheel with cruise control, voice control, a starter button, keyless entry, an auto-dimming rear-view mirror, auto-folding side mirrors, a 12-Volt socket in the boot and two extra tweeters to enhance the vocals on the Brezza’s sound system. All variants have climate control, rear parking sensors and a rear-view camera as standard. 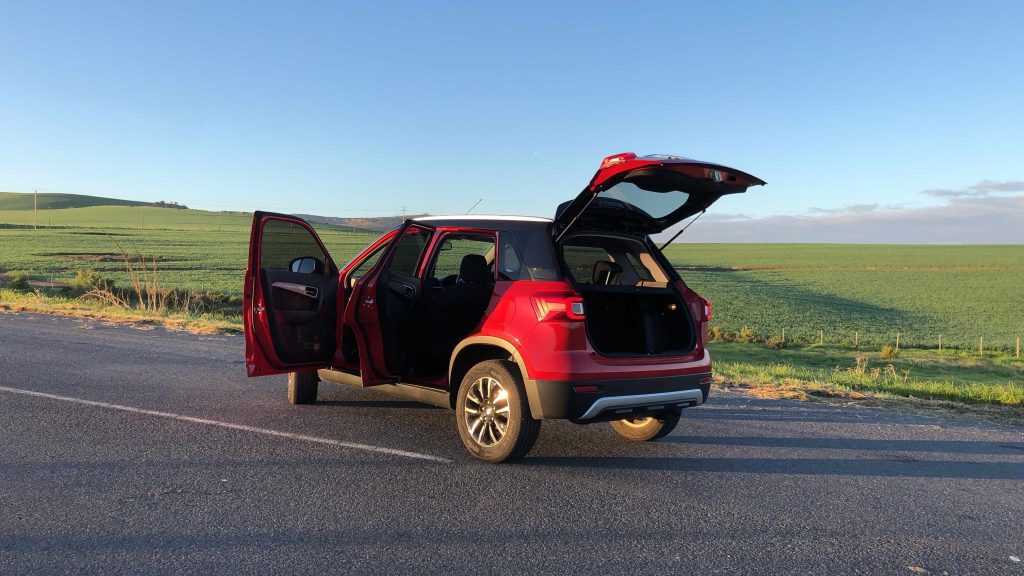 The Brezza offers more space on the inside than you would imagine especially for the rear seats. Legroom is quite generous, and the width of the rear seats allows for three average-sized adults to be seated side by side although there is only a lap belt for the person in the middle. Exposed ISOFIX anchorage points on the outer rear seats assists with fitting ISOFIX equipped car seats. There is a central armrest with two cupholders and in front the GLX models have a central armrest with a small storage compartment for keys and a phone. Plush Brezza-branded carpets also seem to be standard on the GLX.

The cargo area is maybe one of the smallest in this segment with the Kia Sonet at 392-litres and the Creta a whopping 433-litres. The breeze only manages 328-litres despite having a full-sized spare wheel taking up its share of volume underneath the boot floor. Two handy storage compartments on the outer edges are perfect for smaller items such as car-care products or a rain jacket etc. Did I mention that the Vitara Brezza has a cool-able glovebox as well as a regular glovebox directly below it? 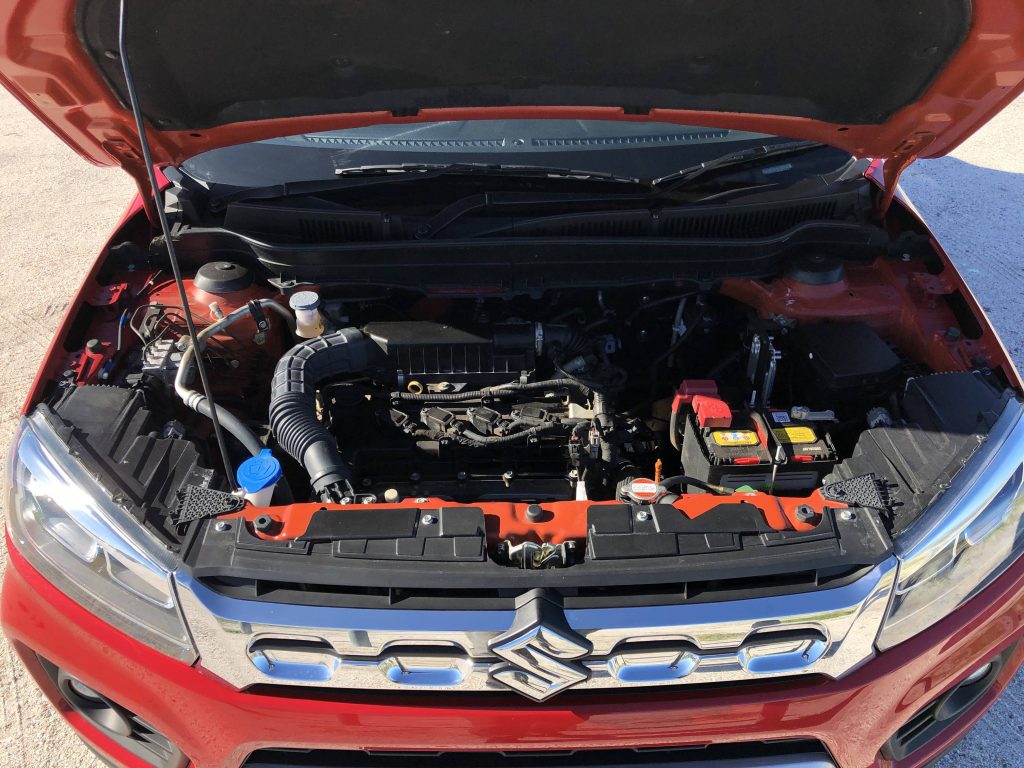 The very popular Suzuki engine go to is the naturally aspirated K15b 1.5-litre engine making a respectable 77 kW and 138 Nm which of course the Brezza has with a 4-speed CVT auto-box being well suited to town and country driving gripping well in the corners but running out of steam at times when it’s faced with an unprepared for steep incline. Personally, I think the manual is the best option and I would rather go for the GLX in a manual than a base model in Auto. Fuel economy was fair for the 4-speed we managed returning 8 litres per 100 km after a week of mixed driving anticipating lower fuel consumption as time goes by.

The Brezza has been extremely successful in India offering a decently sized well-specified safe and affordable compact SUV for the people. Will South Africans be equally impressed? I sure hope so but, the new Urban Cruiser from Toyota (essentially a rebranded Brezza with a starting price of R247 900) might outsell the Brezza, just like the Toyota Starlet is outselling the Suzuki Baleno which you could consider almost unfair.

An important point to remember however is that the Suzuki’s have a longer service plan than their Toyota counterparts. If you’re pinching pennies the Brezza’s 4-year/60 000 km service plan is the more sensible option money wise. Suzuki is also running a promotional mechanical warranty of 5 years / 200 000 km.

Here is the current pricing for the Vitara Brezza range:

The Vitara Brezza offers great value and everyday practicality and economy. It is a versatile and comfortable daily driver which is suitable for everyone. I would recommend the manual gear box and feel the GLX is worth the extra spend. For a young family it’s the perfect all-rounder and for the city slicker that likes to spend weekends away outside the city the Brezza will keep you happy on your adventures. Pop down to your local Suzuki dealership and take a test drive in one soon.